The department has been conducting research in lake hydraulics and hydrology for decades. Our research focuses primarily on extensive and shallow lakes (such as Lake Balaton, Lake Neusiedl and Lake Velencei in Hungary), in which water motions are mainly induced by the wind. Besides field measurements, numerical modelling forms an important part of our research. Our models resolve the topography and the vegetation cover of the analysed lake. Modelling also allows us to extend local measurements spatially and temporally so that a detailed insight can be obtained into the hydrodynamic system of a lake. An important added benefit of modelling – as generally in science – is that we are able to seek explanation for the observed phenomena and to predict the outcome of future changes.

Water motions in lakes vary on a wide scale and include horizontal currents, up- and downwelling currents, water level fluctuations, wind generated surface waves and turbulent mixing. Their joint effect greatly determines how water quality and the lake ecosystem evolves. Large-scale circulations are responsible for the lakewide displacement of suspended materials (or biogeochemical tracers) and planktons. Turbulence induced by the motion of waves stirs up the bed sediments in shallower regions and contributes to vertical mixing.

Wind inclines the lake surface, which can cause considerable water level changes at certain sections of the shoreline. Exchange of water mass due to water surface fluctuations is an oscillatory flow, and, combined with the water surface motion, is known as seiche.

Along with seiche, wind induces currents with typically smaller temporal and spatial scales that are responsible for transporting nutrients, biomass and other matter from their sources (Fig 1 and 2). Owing to the wide variety of scales most of the water volume can provide a habitat for various organisms. 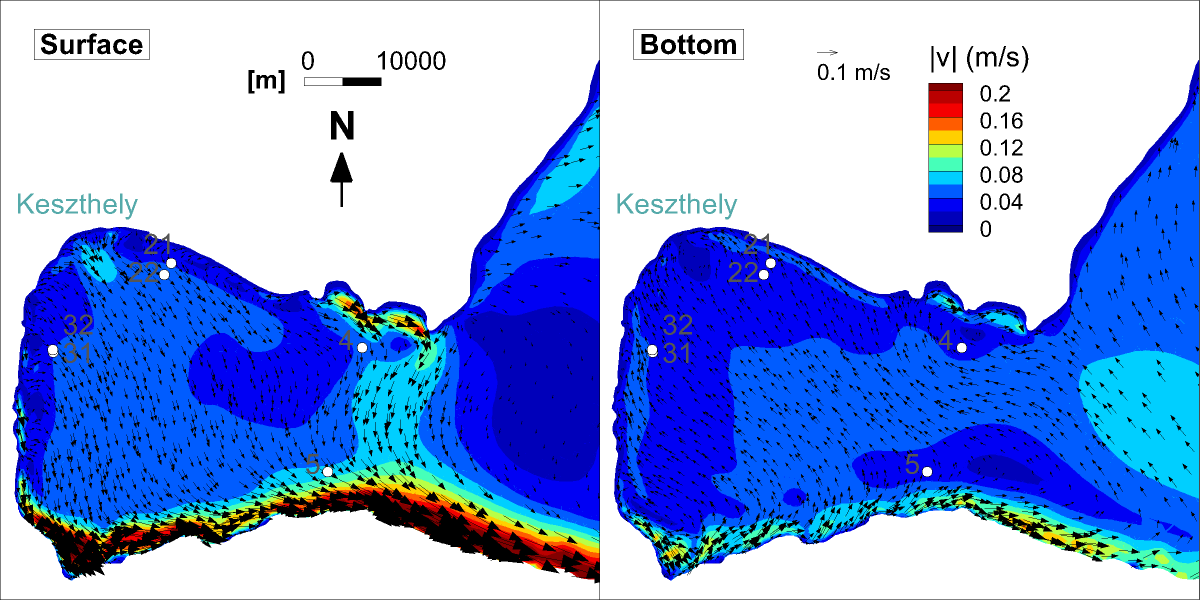 Fig. 1 Time-averaged surface and near bottom currents in the western bay of Lake Balaton in case of N-NW wind. 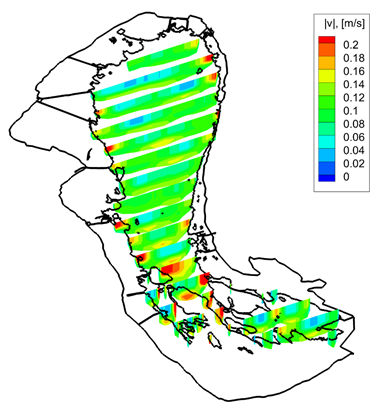 A well-known component of the water surface motion are the wind-generated waves. These surface waves have much shorter periods than the seiche, typically only a few seconds in our lakes, but their height can exceed even one meter. From a hydrodynamic point of view our lakes are shallow because the effect of surface waves can easily reach the bottom and thus they can stir up the (usually nutrient-rich) sediment which is then transported by the currents. This has the consequence that the lake bed is continuously changing, which presents a maintenance task to the owners of beaches and ports. Several quick empirical methods are available to estimate waves but grid-based numerical models are the ones that simulate the dynamics of the wave field most accurately for a general setting (Anim. 2).

Besides hydrodynamics we also analyse the thermal structure of lakes, which is strongly determined by the dynamic processes mentioned before. In calm weather or during weak winds a stratification can evolve along the water column due to density differences that are governed by the temperature. In shallow lakes stratification is typically diurnal (Fig. 3).

In order to predict the distribution of water temperature we have to be account for heat radiation and other heat fluxes that determine the energy budget of a lake. In our research, it is the turbulent heat fluxes that are in focus. They are measured directly with state-of-art eddy-covariance techniques and predicted using micrometeorological models (Fig. 4).

Naturally, hydrodynamics and thermodynamics are not independent, moreover, the emerging picture is complicated by the bathymetry and the variable wind exposure. All of these factors lead to the strong variability of mixing and water temperature distribution (Fig. 5)

During our experiments we have found that probably the greatest source of uncertainty in the modelling of lake hydrodynamics is the temporal and spatial distribution of the wind stress over the lake. In our research we put emphasis on a more accurate description of the wind forcing. It has to be taken into account that airflow accelerates over the water surface with is much smoother than the land surface. The internal atmospheric boundary layer that forms over the lake due to the roughness difference creates a horizontal inhomogeneity in the wind stress that is closely linked to the induced lake currents, especially along the windward shoreline (Fig. 6). 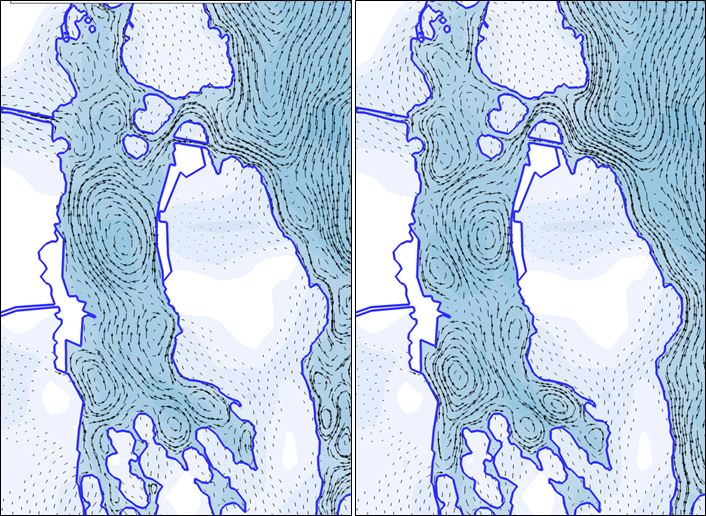